As we were having discussions on the importance of Gender Equality in the Value education class and the students were assigned to choose one of their favourite fairy tales and find out the parts which were gender-discriminatory. They were then assigned to change the fairy tale and show gender equality between the male and female characters.

The following is a story submitted by a student of grade –

I do not have any favourite fairy tale. My favourite one has the girl stronger than the prince. So I decided to write one of my own….

When the tigers used to smoke, there lived a queen. Her name was Aurora!

Aurora was the queen of Auradon. And she had a daughter called Audrey who had turned evil in the time of the descendants.

Aurora was a very free and kind queen. And of course, she wasn’t particular about colours like pink and purple and all that jewellery and those princess beds and cosy rugs and unicorns! Instead, she preferred blue and green, and bunk beds and dragons and dance floors. But, she wasn’t actually following her choice, she had to obey what the king told her to. The king never had bad intentions. He never wanted Aurora to go through all this trouble. But he was worried about a dark villain called the WNIM (Worst nightmare).

The WNIM was the end of the unique. Why? He never wanted the girls to succeed. And so the king never allowed anything unique for the women in the kingdom. But what he didn’t know was that we can’t live in fear, it doesn’t save us from anything. In fact, it welcomes danger. Because fear is the food of villains!

Aurora was in a deep thought….If she wore blue…no one was there to stop her. And even if the king will try to stop, it’s her life. She is the owner of her life and she has all the rights. So without thinking, she ran out.

Ben the king was scared, and told Audrey to look for Aurora. Audrey said “I am pretty busy! And umm–m, I am a girl! I cannot do that!” So then King Ben agreed and he went looking for Aurora.

WNIM was passing by when he saw Aurora. And he saw Ben nearby and decided to kill him and show Aurora and tell her that women are nothing. Before he could even go near the king, Aurora, even though she didn’t know any archery or battle skills, she knew some common sense that the human mind can’t think of during tense situations.

And as people said, Ladies are calm so they can’t attack. Aurora was calm and she was patient. She looked around and instead of hitting WNIM. She started daydreaming. About how women can save the world, and thought of a balance between the genders. As the nightmare could stand only nightmares. The dream broke him. And King Ben was safe again. And from that day there were no gender differences followed in Auradon. Women battled and conquered while men cooked and painted and danced.

How to help your child get- stay organized? A well-organized life always shines and makes…

Stories are treasure house of Knowledge

The primary focus of Economics Subject is the analysis and description of the production, distribution,…

We warmly invite you to experience our annual Open Day in 2021. Come and see AGS in Action and meet the Principal and Leadership Team.
Book a Tour
WE LOOK FORWARD TO MEETING YOU. 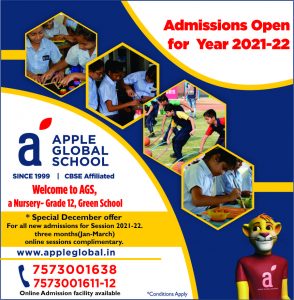